Since Obon, the Japanese Festival of the dead starts in the middle of this month (for some areas it already happened this past July), we interviewed author Zack Davisson about his experiences with Obon, interest in Japanese ghosts, his career, and more. Chin Music Press is selling signed copies of his recently released book Yurei: The Japanese Ghost here. 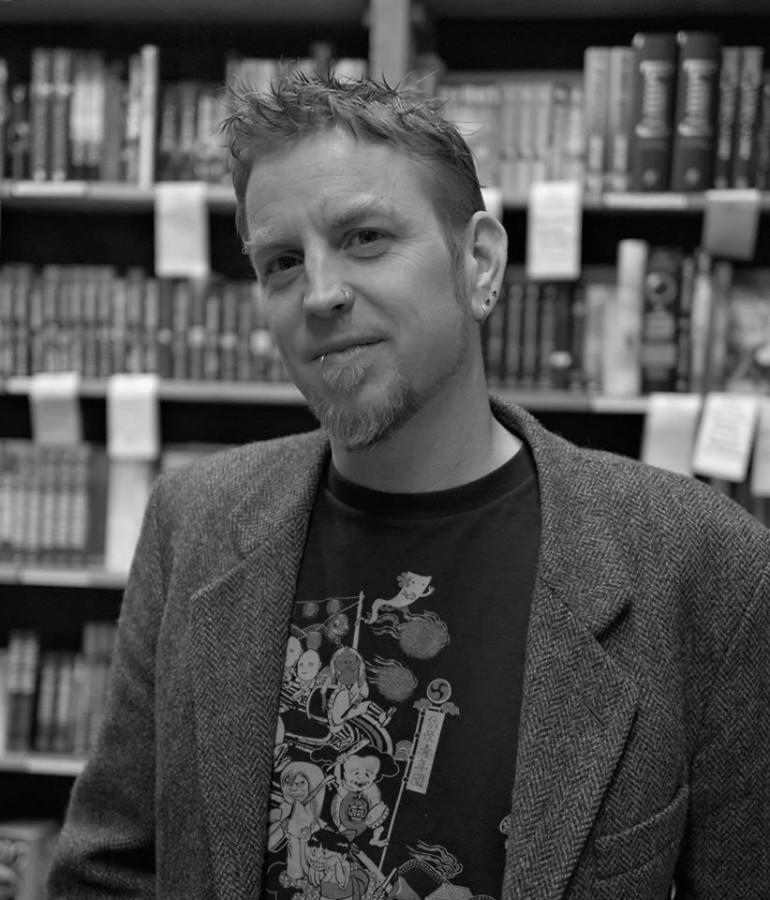 Chin Music Press: What sparked your interest in Japan and Japanese culture? Specifically why these tales of the weird (kaidan)?

Zack Davisson: My first introduction to Japan and Japanese culture was when I was young—about 9 or 10 years old—when my mother took me to see Kurosawa Akira’s film Seven Samurai. I was captivated. My love of folklore was even younger. I’ve always been interested in the supernatural—in myths and legends and the weird and mysterious. I don’t really know why. As a kid I obsessed over D'Aulaires' Book of Greek Myths. I watched In Search Of … and was fascinated by oddities like the Jersey Devil and Spring-Heeled Jack. My first exposure to Japanese folklore was in the TimeLife The Enchanted World series which retold the story of Oiwa.

When I finally moved to Japan, I realized that it was a country swelling with gods and monsters, with supernatural stories and weird tales. Like the comics of Shigeru Mizuki, and the tales of the Hyakumonogatari. But it was all locked away behind the barrier of language. I started studying Japanese seriously because I knew that was the only way I would get to read everything I wanted to read.

CMP: What’s your first encounter with Obon and what was the experience like?

ZD: It was overwhelming, because Obon happens to be on my birthday. I had only been in Japan a couple of weeks by then, and hadn’t really heard of Obon. But suddenly around my birthday Japan transformed.  Lanterns were everywhere. Nara Park, near where I lived, was filled with thousands of candles and chanting and a sense of the mystic. It was surreal, and special.

At the same time, few people could answer my questions about Obon. In Japan it is like Christmas is celebrated in the US—you just perform the traditions without understanding their origin or meaning. It is so deep in the culture that few people question it.  Sometimes I think it takes an interested outsider to ask the question “Why?”

CMP: What was it like living in Japan? How did it feel to be a foreigner?

ZD: That’s way too big a question to answer in a few sentences! I will say that when I got there, everything was like a fantasyland. Everything was weird and strange and interesting and incredible! But as the years went by, it became familiar—comfortable. I realized that at the beginning all I was seeing was the surface, and none of the depth.

This especially changed the more I learned the language.  Living in Japan, in Japanese, is a different experience than being there as an English-speaking tourist.

And of course, as a foreigner you can never be Japanese. Accepting that is important.

CMP: What current projects are you working on?

ZD: Aside from finally getting Yurei out, I am doing a lot of manga translation. I am working on a 7-volume series of Mizuki Shigeru’s famous folklore comic Kitaro for Drawn & Quarterly, and one of my all-time favorite comics Queen Emeraldas for Kodansha. I also write Japanese folklore and culture essays for the comic Wayward from Image.

And I have other long-term projects as well, including another book I am working on. I will always have more projects than time, sadly!

CMP: How has kaidan evolved in Japanese culture today? Can we see elements of it in other cultures (like in America) and how it is used?

And new kaidan appear all the time, even if they aren’t specifically called kaidan. People have switched terminology to call them “urban legends” or “memes,” but the result is the same. Scary stories like “One-Man Hide and Seek” or “Red Paper, Blue Paper” or the “Human-faced Dogs” are even now terrifying school children and confounding academics.  Only now instead of sitting in a circle in someone’s living room putting out candles in a game of Hyakumonogatari Kaidankai, they are posting on the Internet. But the results are the same.

CMP: Did the learning about kaidan and Obon festivals make you more spiritual or religious in any way? Does it change the way you view life?

ZD: Not really. I tend to stay perfectly agnostic on the reality of things like that. I enjoy ghost legends, and I believe in them to some extent. If you look at every culture in every place on earth, they all had ghost legends of some sort. I find it impossible to discount those out of hand. What those ghosts are, what they really mean—I don’t think anyone knows for sure. And anyone who says they know with 100% certainty is fooling themselves.

I keep an open mind, but ultimately I enjoy the mystery more than the answers. I don’t want answers about the big questions, to be honest. I want to live at least a little bit in the imagination, whether or not it is to stand on the shores of Loch Ness and peer into the darkness hoping to catch a stray flipper, or to stand before the massive Daibutsu of Nara on Obon, smelling and feeling the incense pouring out like a tangible mist, hearing the trancelike droning of the Buddhist chants, and dreaming of a world swimming with ghosts flowing freely around you and through you.

CMP:I’ve heard you have done a lot of translation. Can you describe the experience of it and common misconceptions people have about it?

ZD: The biggest misconception is that translation is like math; that you just replace one word with another. If you could do that, then machine translation wouldn’t be such a failure. Translation is an incredibly creative activity. Really, it is a collaboration between the translator and the author.  When you translate someone, you get into their minds. You have to understand more than their words, you have to understand their intentions.

Lots of people don’t like to hear this, but Murakami Haruki translator Jay Rubin summed it up best when he said that when you are reading Murakami books, they are actually 95% Jay Rubin. All of the Murakami fans got upset about that, while all the translators just nodded knowingly.

CMP: How does your role as a translator impact your own writing?

ZD: Being a translator has made me a better writer, that’s for sure. Spending so many hours trying to figure out another person’s words and intentions, and why they wrote the way they wrote.  And being a translator means you have to be able to write in different styles. I can’t translate Mizuki Shigeru the same way I translate Kon Satoshi or Tatsumi Yoshihiro.

I enjoy them both, translating and writing. To me they are equally creative, satisfying endeavors.  And I am equally proud of my translations as I am of my own books. At home I have a shelf of all my works, and you can be sure my translations are on there with everything else.

ZD: My favorite is Botan Dōrō —or I should say Botan Dōrō as told by Ryōi Asai, as there are many different versions. I am a romantic at heart, and the love story of a poor ghost girl and a lonely man finally finding love together touches me more than all of the tales of ghostly vengeance. Even with its horrific finale! I love all the elements of it. It has that sense of mystery I love, that sense of the numinous.

And it is one of the few kaidan that take place on Obon, which makes it even more special.

Zack Davisson is a translator, writer, and scholar of Japanese folklore and ghosts. He is the author of Yurei: The Japanese Ghost, The Ghost of Oyuki, and The Secret Biwa Music that Caused the Yurei to Lament from Chin Music Press. He  contributed articles to Weird Tales Magazine, Japanzine, and the comic book Wayward from Image comics. As a manga translator, he was nominated for the 2014 Japanese-US Friendship Commission Translation Prize, and is the translator of the Eisner Award winning and Harvey nominated Shigeru Mizuki's Showa: A History of Japan. For Drawn and Quarterly, Davisson translates and curates the famous folklore comic Kitaro. For Dark Horse, he translates Satoshi Kon's work, including OPUS, Seraphim: 266613336 Wings, and The Art of Satoshi Kon. He was also a researcher and on-screen talent for National Geographic’s TV special Okinawa: The Lost Ghosts of Japan, has appeared as a commentator on Chinese news network CCTV, and maintains the popular Japanese folklore website hyakumonogatari.com. He currently resides in Seattle, Washington, with his wife, Miyuki, their dog Mochi, cats Bagheera and Sheer Khan, and several ghosts.