Ah, Halloween. Carved-out pumpkins, streets filled with trick-or-treaters and haunted houses. It’s an exciting time for everyone, but did you know it’s celebrated in more places than you would think? Asia, for example, celebrates in some interesting ways. 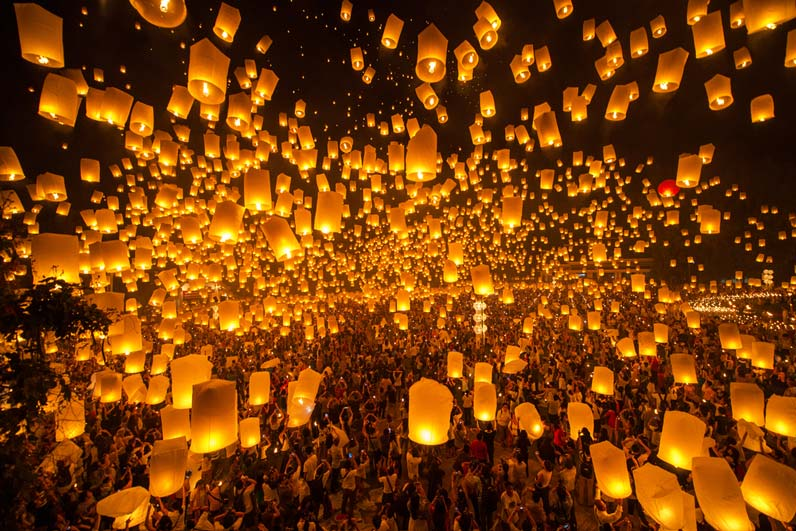 Remember that scene in Tangled? The one where Rapunzel and Flynn Rider are on the boat with the floating lanterns all around? Well, this is just one of the ways that China celebrates it version of Halloween, or as it’s called, Teng Chieh. This two-thousand-year-old festival is celebrated in the first month of the lunar calendar and marks the end of the Chinese new year. The religious holiday is celebrated with tang yuan, sweet dumplings shaped like the full moon. People hang lanterns around homes and streets that are said to ward off evil spirits while its light attracts heavenly spirits. People also offer food to the deceased members of their family.

The tradition of offering food is also seen in the the Japanese festival called Obon. Lanterns are also hung for this event to guide spirits who are said to come to our world in order to visit family. This day is celebrated with the Bon Odori, or the Bon dance used to welcome the spirits. This dance varies from region to region. People, like the spirits, visit their relatives and family graves during this time. While it varies from region to region, it is celebrated in many areas in the month August.

Another country that celebrates the dead around August would be Korea, where it is called Chuseok. This celebration is also used to visit family and grave sites. In the morning, Charye, a memorial rite, is performed by offering special food for their ancestors. The placement of the food on the table is very important. Also known as Korean Thanksgiving, this event celebrates the harvest with food such as hangwa, a traditional confectionary.

While the names and traditions are different, these holidays celebrate and respect the dead. Halloween, which traditionally marks the beginning of the days meant to remember the dead, shares this custom. So however you spend your Halloween this year, you can now enjoy it knowing there’s other countries out there who celebrate it, too! Have a safe Halloween!